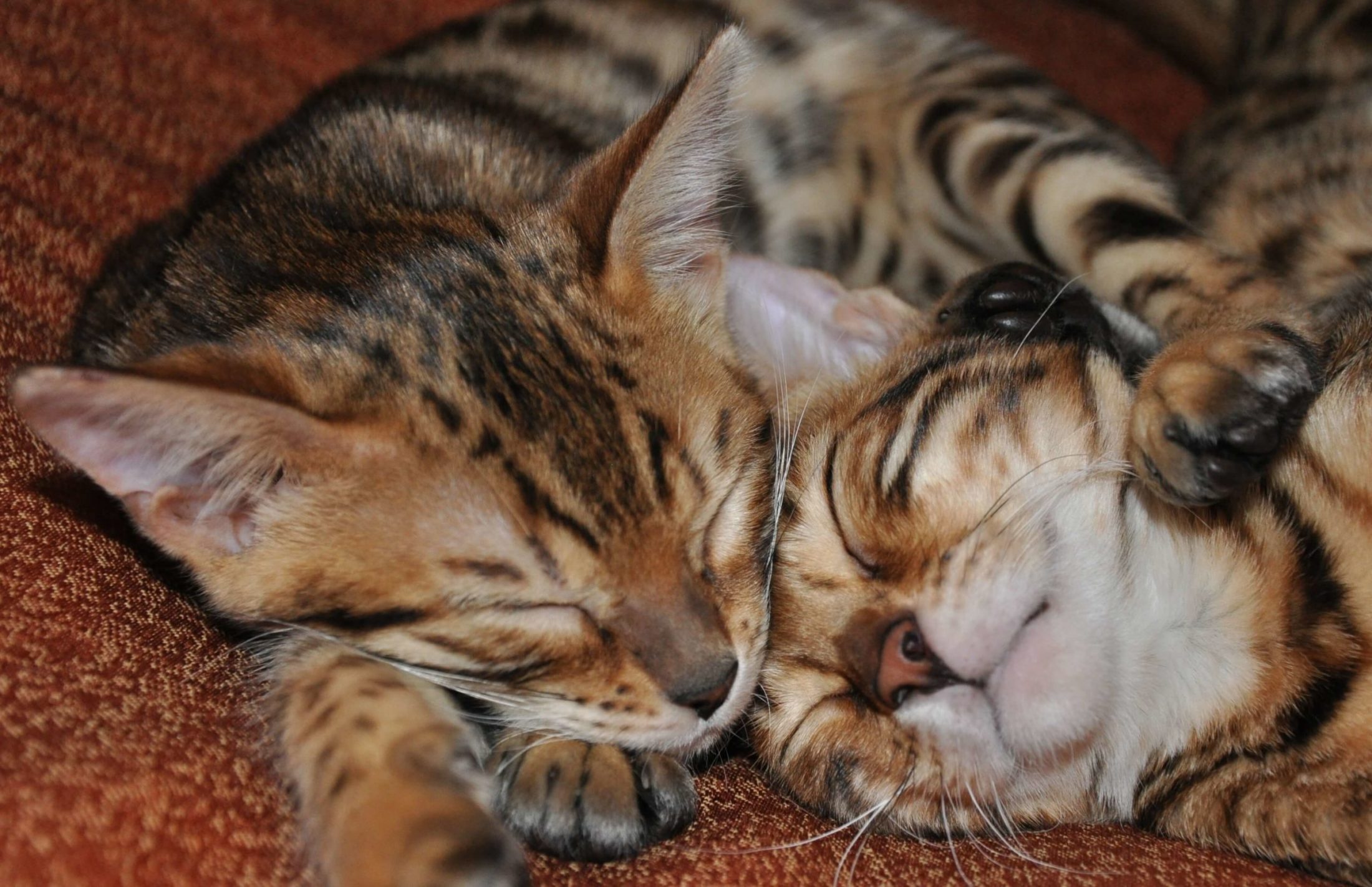 When expecting a litter from a bengal cat, it is best to be prepared to take care of and handle the number of bengal kittens that are born.

Whether you’re breeding bengal cats as a full time career, or simply want to expand your bengal cat family, knowing how many kittens to expect is helpful.

The average bengal cat litter size is around 4 bengal kittens.

Bengal cats will typically have a litter of 3-6 kittens but the litter can vary in size depending on a few different factors.

These factors are mainly how old the mother is, how healthy the mother is, the filial generation of the bengal mother, and how many litters that mother has already had.

If the bengal mother is young and healthy, and is an F4, F5, or beyond, then she will likely have over 4 bengal kittens and in some cases can have more than 10 kittens in a single litter.

If the mother is older and has already had several litters of kittens, she may only produce 3 or 4 kittens, or less if she is an F1, F2, or F3 bengal cat.

Why Do F1, F2, and F3 Bengal Cats Have Smaller Litter Sizes?

Bengal cats that are of the F1, F2, and F3 filial generations tend to have smaller litter sizes.

The letter ‘F’ along with a number indicates how far removed that bengal is from the Asian leopard cat, the wild ancestor of bengals.

Wild cats usually have smaller litter sizes than domestic cats because it is more important for them to be able to care for their kittens than to simply produce a large number of them.

For this reason, bengal cats that are more genetically similar to wild cats will usually have less kittens in their litters.

Once a bengal cat is 3-5 generations removed from the Asian leopard, their litter size will be closer to the litter sizes of fully domestic cats and will be in the range of 3-6 kittens.

Can You Tell How Big a Bengal Cat Litter Will Be before Birth?

If you want to know the number of bengal kittens to expect from a pregnant mother bengal, there are a few options but in general, it is much easier to simply wait and see.

One option to tell how many kittens a pregnant bengal will have is to give the mother bengal an ultrasound.

Ultrasounds are the method that most human mothers use to see the gender, health, and development of their children.

It is rare to get an ultrasound for a cat, but it is possible if you are very eager.

A second option to tell how big a bengal cats litter will be before birth is to have a vet manually feel the bengal mother and count the number of heads of her kittens.

This number will not always be exact, and a trained and experienced veterinarian is needed to be able give a number with accuracy.

You can also try and feel the mother yourself to see how many kittens you can count if she is far along in her pregnancy and her kittens are reaching the later stages of their development.

The third way to tell how big a bengal cat litter will be is to take into account the previous litter sizes of the bengal mother, the bengal mother’s health, how many litters the mother has already had, and how old she is.

Once a cat is older and has already given birth to several litters, the litter size will usually begin to decrease, so by knowing the mothers age and history of litters, you can get a good estimation of how many kittens she will have in her litter.

You can also use the filial generation of the bengal mother to roughly estimate how many kittens will be in her litters.

How Many Kittens Will F1 Bengal Cats Have?

F1 bengal cats will typically have 2-4 kittens in their litters.

This means that F1 bengals are only one generation removed from Asian leopards.

Asian leopard cats usually have a litter size of 2-3 kittens since they are wild cats.

Since F1 bengal cats are genetically similar to Asian leopards, their litters will also be small and they will usually have around 3 kittens, depending on what domestic cat the Asian leopard was bred with.

How Many Kittens Will F2 Bengal Cats Have?

F2 bengal cats are bengals that have one F1 bengal cat parent and one domestic cat parent.

F2 bengal cats are two generations removed from the Asian leopard and will usually have around 2-4 bengal kittens in their litters, also depending on what domestic cats they and their parent were bred with.

How Many Kittens Will F3 Bengal Cats Have?

F3 bengal cats are three generations removed from the Asian leopard and are considered to domestic cats with more similarities to other domestic felines than F1 and F2 bengal cats do.

F3 bengals will typically have 2-5 bengal kittens in their litters.

How Many Kittens Will F4 Bengal Cats Have?

F4 bengal cats will usually have 3-6 kittens in their litters.

How Many Kittens Will F5 Bengal Cats Have?

F5 bengal cats are also commonly owned and usually have 3-6 kittens in their litters.

On average, F5 bengals have about 4 kittens in their litters and may have more or less based on the domestic cat they’re bred with and other factors such as age, health, and litter history.

F6, and beyond bengal cats all will have litter sizes of around 4 kittens or more.