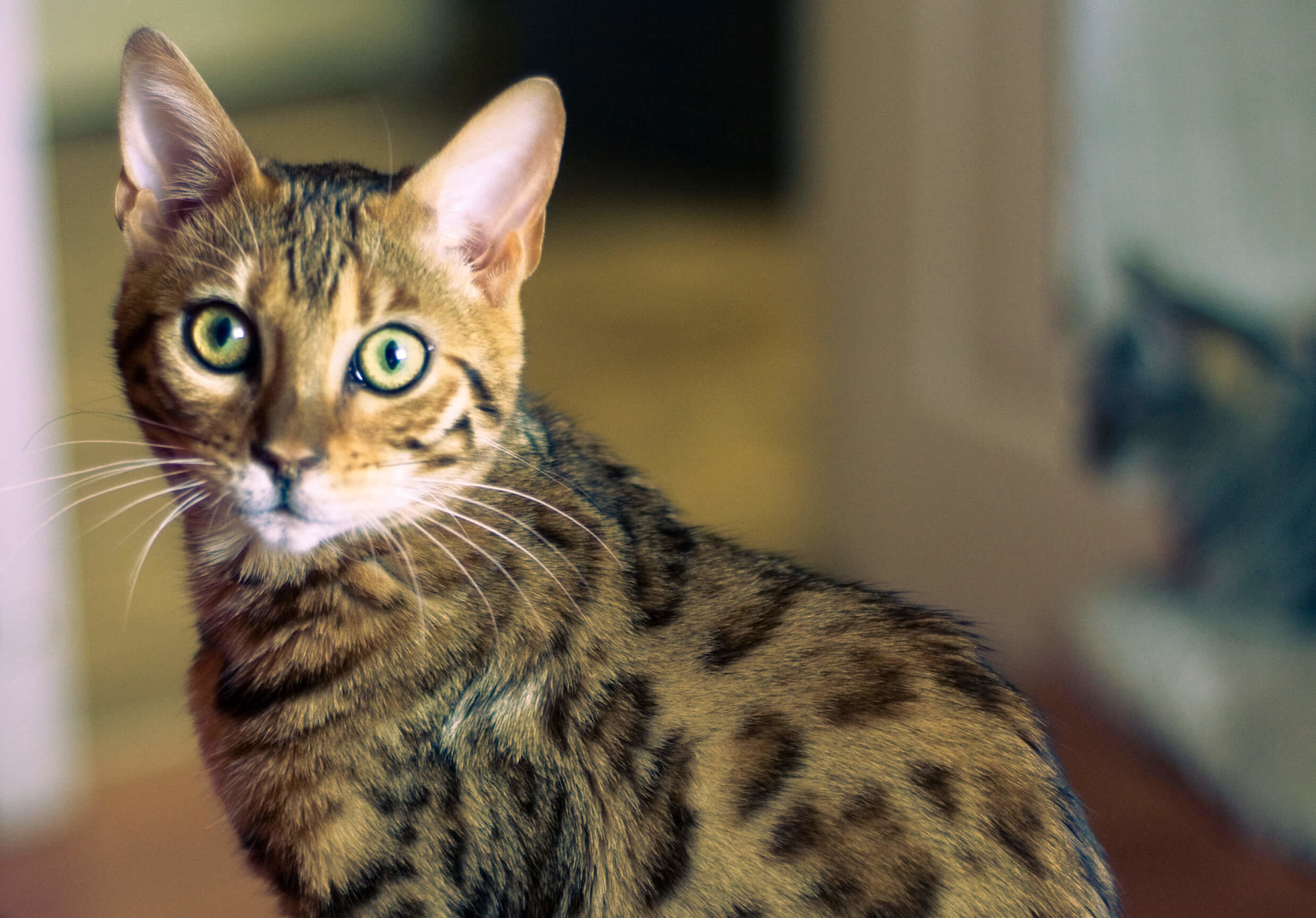 For many cat owners, spraying is one of the worst behavioral problems a cat can have.

Spraying is when a cat urinates horizontally onto a surface in order to spread their scent around their territory.

Cats that spray can quickly ruin a home and cause great amounts of stress to their owners.

All breeds of cats spray, and bengals are not more or less likely to spray than other domestic cats.

If your bengal cat is not F5, however, but rather F1, F2, or F3, then it will be more likely to spray than other domestic cat breeds.

‘F’ in breeding stands for “fili” meaning offspring. The titles of F1, F2, F3, etc are used to denote how far removed a bengal cat is from the Asian leopard cat they share genetics with.

The further from F1, the further that bengal is genetically from the Asian leopard cat and the more domestic it is.

If your bengal cat is closer to an Asian leopard, and is F1, F2, or F3, then it is more likely to spray since it will be more wild and harder to domesticate.

If your bengal is F5, then it is equally as likely to spray as other domestic cat breeds.

Why Is My Bengal Cat Spraying?

If your bengal cat is spraying, then it is usually for one of several reasons.

The most likely reason that your bengal cat is spraying is due to it feeling the need to claim your house as it’s territory.

If your bengal is an indoor pet then it will feel like it needs to protect where it is living and may treat your house like it’s the outdoors.

If you have other cats, other pets, or any people who the bengal feels threatened by in your home, your bengal cat may try to assert itself through spraying.

If you recently had someone new move in, that could be enough to set the bengal off and cause it to spray.

Bengals are very defensive of their space so everyone living in the house should be familiar and friendly with the bengal so that it doesn’t feel like it needs to mark it’s space.

Another reason that your bengal cat may be spraying is that the litter box is not suitable for the bengal.

Some cats prefer specific kinds of litter and forcing them to use a kind of litter they don’t like might cause them to spray.

A third reason could be that your bengal is stressed out and is using spraying as a way to get your attention and make you aware of a problem it might have.

Spraying can also occur due to medical reasons, and if your bengal cat has a urinary tract infection (UTI) or feline urological syndrome (FUS) then that could be the root cause of its spraying.

How Do You Stop a Bengal Cat From Spraying?

You can stop a bengal cat from spraying by giving it attention, making sure everyone in the house is familiar to the bengal, changing its litter, and allowing it outside more often.

To avoid the spraying problem when you first become the owner of a bengal, you can have it spayed or neutered which will reduce the likelihood of it spraying significantly.

Another solution is to train your bengal by stopping it in the act and using a clicker and treats to reward good behavior.

If you think the problem may be medical, then have your bengal checked by a veterinarian to rule that out as a possibility.

There are also several cleaning products which will remove the smell of cat urine from the house and make the bengal less motivated to continue such as this one on Amazon.

Another product that can help stop your bengal from spraying is a pheromone diffuser that will help calm down the bengal and may stop it from spraying as well. There are several of these on the market, but this one is the most commonly used and highly reviewed.